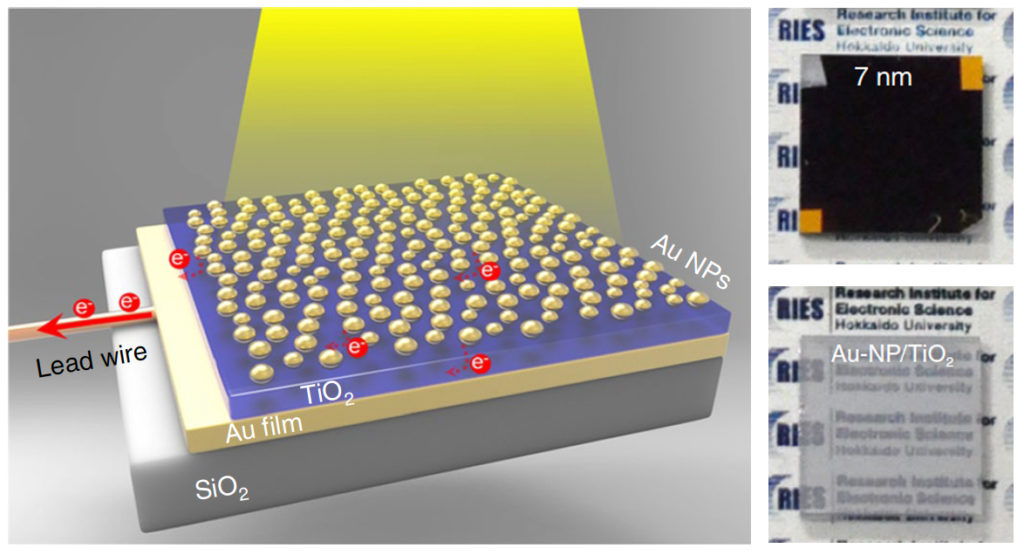 Scientists have developed a photoelectrode that can harvest 85 percent of visible light in a 30 nanometers-thin semiconductor layer between gold layers, converting light energy 11 times more efficiently than previous methods.


In the pursuit of realizing a sustainable society, there is an ever-increasing demand to develop revolutionary solar cells or artificial photosynthesis systems that utilize visible light energy from the sun while using as few materials as possible.

The research team, led by Professor Hiroaki Misawa of the Research Institute for Electronic Science at Hokkaido University, has been aiming to develop a photoelectrode that can harvest visible light across a wide spectral range by using gold nanoparticles loaded on a semiconductor. But merely applying a layer of gold nanoparticles did not lead to a sufficient amount of light absorption, because they took in light with only a narrow spectral range.

In the study published in Nature Nanotechnology, the research team sandwiched a semiconductor, a 30-nanometer titanium dioxide thin-film, between a 100-nanometer gold film and gold nanoparticles to enhance light absorption. When the system is irradiated by light from the gold nanoparticle side, the gold film worked as a mirror, trapping the light in a cavity between two gold layers and helping the nanoparticles absorb more light. To their surprise, more than 85 percent of all visible light was harvested by the photoelectrode, which was far more efficient than previous methods. Gold nanoparticles are known to exhibit a phenomenon called localized plasmon resonance which absorbs a certain wavelength of light. “Our photoelectrode successfully created a new condition in which plasmon and visible light trapped in the titanium oxide layer strongly interact, allowing light with a broad range of wavelengths to be absorbed by gold nanoparticles,” says Hiroaki Misawa.

When gold nanoparticles absorb light, the additional energy triggers electron excitation in the gold, which transfers electrons to the semiconductor. “The light energy conversion efficiency is 11 times higher than those without light-trapping functions,” Misawa explained. The boosted efficiency also led to an enhanced water splitting: the electrons reduced hydrogen ions to hydrogen, while the remaining electron holes oxidized water to produce oxygen­­ —  a promising process to yield clean energy.

“Using very small amounts of material, this photoelectrode enables an efficient conversion of sunlight into renewable energy, further contributing to the realization of a sustainable society,” the researchers concluded.