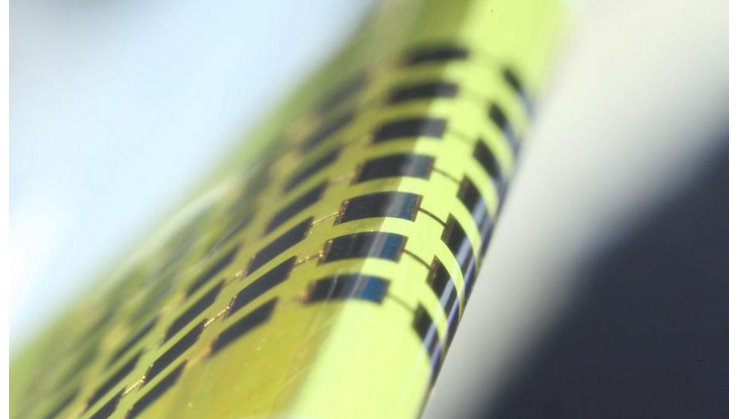 Solar panels have gotten thinner than a human hair. Soon they’ll be everywhere.

One of the reasons I think solar photovoltaic power is going to take over the world is that it is scalable in a way no other power source can be. It can be used to build multi-hundred-megawatt power plants, or it can be scaled down. Way down.

How far down? Try less than the width of a human hair.

Solar cells are getting ridonkulously small

South Korean scientists have created solar PV cells that are 1 micrometer thick, hundreds of times thinner than most PV and half again as thin as other kinds of thin-film PV. (The research is in a paper published in Applied Physics Letters last June.)

The cells are made with gallium arsenide as the semiconductor, “cold welded” directly onto a metal substrate, with no adhesive to make them thicker. Remarkably, they produce roughly as much power as thicker PV cells, though in testing, “the cells could wrap around a radius as small as 1.4 millimeters.” Here are some solar panels, attached to glasses, cloth, and … is that a Q-tip?

With cells this thin, solar PV can be integrated in all sorts of “wearables” — clothes, glasses, hats, or backpacks with solar cells integrated, continuously feeding power to our portable electronics. More to the point, PV could be integrated into just about anything.

This isn’t the thinnest solar cell ever, either. Back in February 2016, MIT researchers made solar cells so small and light they could sit atop a soap bubble without popping it. Here’s how they did it (from the press release):

[Vladimir] Bulović, MIT’s associate dean for innovation and the Fariborz Maseeh (1990) Professor of Emerging Technology, says the key to the new approach is to make the solar cell, the substrate that supports it, and a protective overcoating to shield it from the environment, all in one process. The substrate is made in place and never needs to be handled, cleaned, or removed from the vacuum during fabrication, thus minimizing exposure to dust or other contaminants that could degrade the cell’s performance.

The process takes place in a vacuum chamber at room temperature, without the solvents and high temperatures required to make conventional PV. Researchers say the same fabrication process could work with a number of different materials, including quantum dots or perovskites, yielding solar cells small and transparent enough to be embedded in windows or building materials.

But the trends in solar innovation are clear. Cells are getting smaller and smaller, and more and more flexible, using new fabrication techniques that are less and less resource-intensive.

It’s all super expensive now, and probably will be for a while. Eventually, though, these new methods will find their way into markets and start getting scaled up. With scale, costs come down.