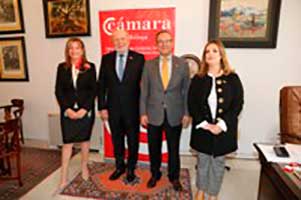 LIBRE EVOLUCION DE ENERGIA S.L. at the Conference on Business Opportunities and Investment in the Philippines.

» Blog » Без рубрики » LIBRE EVOLUCION DE ENERGIA S.L. at the Conference on Business Opportunities and Investment in the Philippines.

It took place at the headquarters of the Palacio de Villalcázar, an informative day on “business opportunities and investment in the Philippines”, organized by the Malaga Chamber of Commerce, with the collaboration of the Consulate of the Philippines in Malaga.

To this day has been especially attended by the Ambassador of the Philippines in Spain, Philippe Jones Lhuillier, being received by the Vice-President of the Chamber, Juan Cobalea Ruiz, who welcomed him and highlighted as in the work of promotion and activities that comes Carrying out the Malaga institution in the field of foreign trade, special attention is being paid to those countries that offer interesting possibilities of investment and commercial exchange, being proof of this this meeting dedicated to the Philippines.
The opening ceremony of the Conference was carried out by the President of the Committee on Foreign Trade of the chamber, María Paz Hurtado Cabrera, who made a wide presentation of Mr Lhuillier, after which he gave a presentation of the main sectors of our province and expressed the desirability of establishing new contacts to promote trade relations between the two countries.
For his part, Mr. Lhuillier expressed his gratitude to the Malaga Chamber of Commerce for the celebration of this day, commenting below the favorable opportunities presented by the Philippines because of its growth, exposing in detail that His country is currently immersed in a large infrastructure plan which will invest some one hundred and fifty billion euros in the period 2017 to 2022.
Specifically, this infrastructure plan aims to improve road connections, as well as other types of transport such as air, with new airport terminals, or the realization of various metro lines in some of the major cities.
Hence, the Ambassador revealed the great interest that can have for Spanish companies, whether construction, engineering or energy, the opportunities currently presented by this Asian country in these sectors.