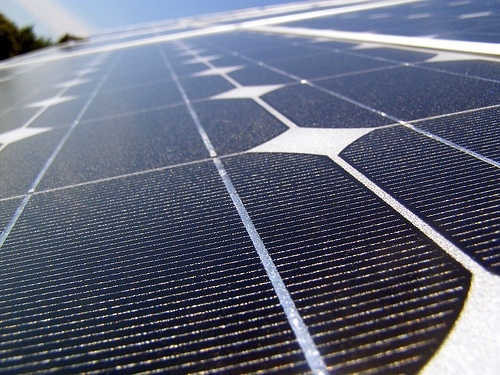 Researchers have designed a light-harvesting funnel that absorbs sunlight from any direction and concentrates it onto smaller areas, such as high-performance solar cells. By stacking multiple funnels, each tuned to a different wavelength of light, the researchers expect that it could be possible to convert the entire solar spectrum into electricity with high efficiency.

Randomly oriented light-harvesting pigments (green) funnel the sun’s energy to other molecules (red) that all have the same orientation, which diret the energy onto a photoconversion device. Credit: Pieper et al. Published in Nature Communications

The scientists, led by Peter Jomo Walla at the University of Braunschweig in Germany, have published a paper on the light-harvesting funnels in a recent issue of Nature Communications.

Although other solar concentrators exist that collect the sun’s energy from large areas and direct it onto smaller areas, these devices face certain limitations. For instance, they don’t work well in the shade, instead requiring direct solar irradiation, and as a result they usually rely on active sun-tracking systems.

Nature has shown, however, that it’s not impossible to design a solar collector that overcomes these limitations. In living organisms that use photosynthesis, hundreds of randomly oriented pigments absorb photons even from indirect light, and funnel the energy toward a photosynthetic reaction center. Each step in this process occurs with nearly 100% efficiency.

In the new study, the researchers modeled the new light-harvesting funnels on nature’s design. The devices consist of a large number of randomly oriented “donor” pigments that can absorb light from nearly all incident angles, and funnel it onto a smaller number of “acceptor” molecules that are all oriented in a single direction in order to direct the light onto a photoconversion device. This concept can reduce the intrinsic losses of previous solar concentrators to below 10%.

“By minimizing intrinsic loss mechanisms of previous light concentrators, I believe we have found a concept and an affordable realization that can help lead to the more widespread use of precious high-performance photovoltaics,” Walla told Phys.org.

In tests, the researchers demonstrated that the new solar concentrator absorbs approximately 99% of the incident light, with minimal losses due to reabsorption and reflection. The device also has a light redirection quantum efficiency of 80%, which the researchers note is the most important parameter as it depends on the particular wavelength of the photons.

In the future, the researchers expect that these devices can be stacked on top of each other, with each device containing different pigments corresponding to different spectral ranges of sunlight. As the device materials are affordable, a stacked structure could lead to a low-cost, efficient method of collecting the sun’s energy from across the entire solar spectrum.

“The pigments used in our proof-of-principle study currently cover only the blue spectral range and are not stable enough for long-term exposure to sunlight,” Walla said. “However, our concept allows for screening a multitude of additional stable pigments of different colors for their ability to act either as light-harvesters or light-redirectors. We are very enthusiastic about finding further suitable pigments and stacked architectures to ultimately cover the entire solar spectrum with high efficiency.”