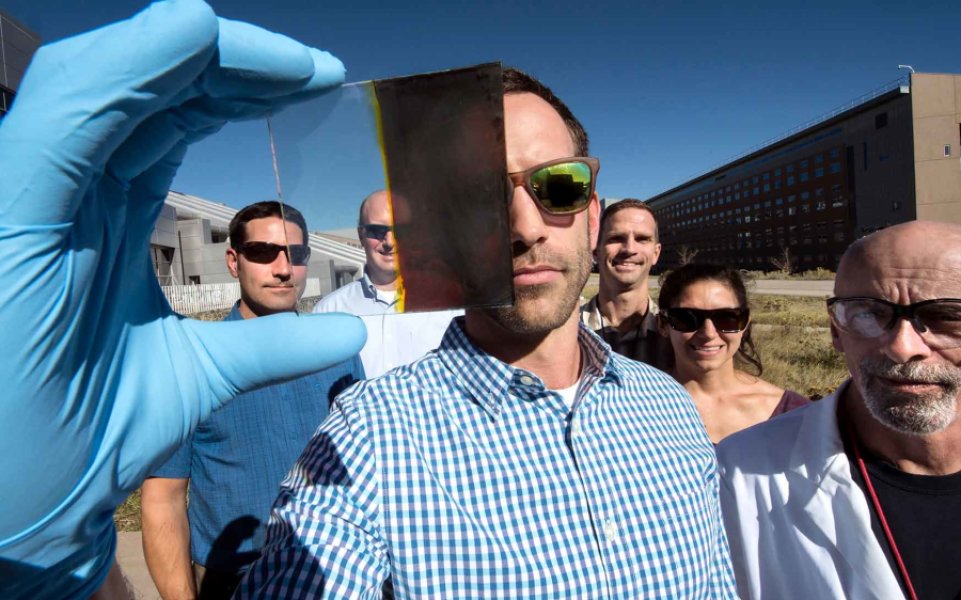 Thermochromic windows capable of converting sunlight into electricity at a high efficiency have been developed by scientists at the U.S. Department of Energy’s National Renewable Energy Laboratory (NREL).

Relying on such advanced materials as perovskites and single-walled carbon nanotubes, the new technology responds to heat by transforming from transparent to tinted. As the window darkens, it generates electricity. The color change is driven by molecules (methylamine) that are reversibly absorbed into the device. When solar energy heats up the device, the molecules are driven out, and the device is darkened. When the sun is not shining, the device is cooled back down, and the molecules re-absorb into the window device, which then appears transparent.

A scientist at NREL holds a piece of glass that is split between transparent and opaque. Lance Wheeler (front) developed a switchable photovoltaic window along with (from left) Nathan Neale, Robert Tenent, Jeffrey Blackburn, Elisa Miller, and David Moore. (Photo by Dennis Schroeder/NREL)

The NREL-developed demonstration device allows an average of 68 percent of light in the visible portion of the solar spectrum to pass through when it’s in a transparent, or bleached, state. When the window changes color — a process that took about 3 minutes of illumination during testing — only 3 percent is allowed through the window. Existing solar window technologies are static, which means they are designed to harness a fraction of the sunlight without sacrificing too much visible light transmission needed for viewing or the comfort of building occupants. “There is a fundamental tradeoff between a good window and a good solar cell,” said Lance Wheeler, a scientist at NREL. “This technology bypasses that. We have a good solar cell when there’s lots of sunshine and we have a good window when there’s not.”

The proof-of-concept paper published in Nature Communicationsestablished a solar power conversion efficiency of 11.3 percent. “There are thermochromic technologies out there but nothing that actually converts that energy into electricity,” Wheeler said. He is the lead author of the paper, “Switchable Photovoltaic Windows Enabled by Reversible Photothermal Complex Dissociation from Methylammonium Lead Iodide.”

In testing under 1-sun illumination, the 1-square-centimeter demonstration device cycled through repeated transparent-tinted cycles, but the performance declined over the course of 20 cycles due to restructuring of the switchable layer. Ongoing research is focused on improving cycle stability.

The path to commercialization of the technology was explored last year during a two-month program called Energy I-Corps. Teams of researchers are paired with industry mentors to learn what customers want of the technology and develop viable ways to reach the marketplace. Lance Wheeler and Robert Tenent, the program lead for window technology at NREL and co-author on the paper, teamed up to develop a market strategy for a product they called SwitchGlaze. The effort was funded by the Emerging Technologies program within the Department of Energy’s Building Technologies Office.

Wheeler said the technology could be integrated into vehicles, buildings, and beyond. The electricity generated by the solar cell window could charge batteries to power smartphones or on-board electronics such as fans, rain sensors, and motors that would open or close the windows as programmed.